Sacco System, the international biotech pole operating in the food, nutraceutical and pharmaceutical industries is now bringing its vast decades of experience to the nordic countries with the rebranding of the subsidiary Sacco System Nordic AB, formerly known as Kemikalia AB.

Kemikalia, now Sacco System Nordic, was established as a private company back in 1914 in Malmö. Cheese rennet and butter colour were the signature products of the company from the very beginning, and so they continued to be for many years to follow. During the Second World War, Kemikalia was acquired in 1942 by SMR (Swedish Dairies National Association) with the primary aim to ensure the supply of cheese rennet for the Swedish dairy companies.

In 2006 with its new headquarter in Skurup, Kemikalia was sold to Caglificio Clerici, a member of what has become today’s Sacco System. Later in 2021, the ownership structure of Kemikalia underwent a series of changes that resulted in the Verga family in Italy becoming the majority owner. As a result, Kemikalia became part of the Sacco System, owned by the Verga family.

Starting from the first of May 2022, after 108 years of activity, Kemikalia will change its name to Sacco System Nordic AB, and thus officially become a full subsidiary of Sacco System for the nordic countries.

To further strengthen its presence in the nordic countries, SACCO SYSTEM has appointed Mr Anders Olsson as CEO, who led the company in the latest years.

“We have had good cooperation with Sacco, Caglificio Clerici and Centro Sperimentale del Latte for many years, now we become part of the Sacco System for real. This strengthens us as a company as we can offer a larger product range and, thanks to Sacco System´s research and development department, better service to both existing and new customers. We will be Sacco Systems' Nordic base and we look forward to a strong development for our company and our cooperation with the Nordic market” says Anders Olsson.

“The creation of the Sacco System Nordic subsidiary is a welcome addition to the Sacco System Group of companies. By having a permanent presence in these countries, we will be able to give our partners strong support and increase our business development activities in the dairy cultures, plant-based alternative fermented products, probiotics and vitamin market. This is an exciting step for our 150-year family company and we look forward to supporting our clients in the Nordic countries with our high-quality products and services”, says Mrs Iris Verga, member of the board of directors of Sacco System Nordic.

This website uses cookies to ensure you get the best experience on our website. Other information
SETTING OF COOKIES
Learn more     I accept all
*You can withdraw your consent at any time by accessing the Cookie Settings page via the link available in the footer of the site.
Sacco System pursues expansion opportunities in the Nordic countries - Blog 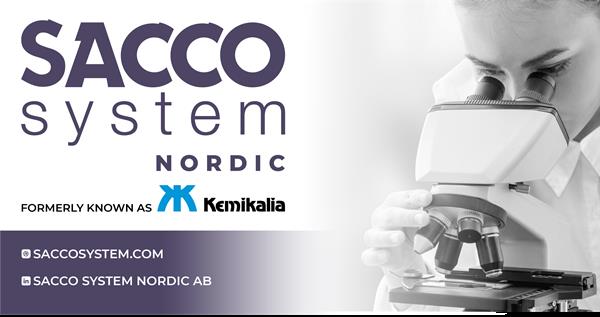